Pycnanthemum muticum (blunt mountain mint) serves as a tremendous draw for pollinators and brings a coarse vertical structure as well as a spearmint-link aroma to the winter garden.

Blunt mountain mint is a favorite of Lurie Garden Director and Head Horticulturist Laura Ekasetya and can be found in the garden’s light plate, usually surrounded by numerous honeybees, native bees, wasps, and butterflies. This member of the Lamiaceae (mint family) is native to eastern North America from Maine to Michigan to Illinois and south to Florida and Texas.

Growing up to 3 ft. tall and 3 feet wide, blunt mountain mint has a strong clump-forming growth habit, is a good naturalizing plant, and is drought tolerant. Some people may shy away from P. muticum given the reputation of mints as aggressive spreaders in the garden; however, unlike true mints (Mentha species), blunt mountain mint is not invasive although it will slowly spread by rhizomes. Unwanted spreading of this species can be controlled by cutting of the underground rhizomes by a spade. Blunt mountain mint displays pinkish-to-white flowers from July-September along with dark green leaves that have a strong mint-like scent. Flowers are accompanied by powdery white-to-silver bracts that give plants the appearance of being dusted by snow.

In Lurie Garden, P. muticum is planted in large masses or blocks that maximize the aesthetic and ecological impact of the plant for visitors and pollinators, respectively. Plants grow best in fertile, moist-to-medium moisture soils that are well-drained. Blunt mountain mint flowers best when planted in full-sun, but can grow in bright shade.

While serving as a tremendous draw for pollinators of all type during its July-September bloom period, P. muticum serves to bring a coarse vertical structure to the winter garden. Flower remnants of the species offer up a delicate, structural appearance upon close inspection. Around the base of winter stems, blunt mountain mint produces small, deep green wintergreen stems. And as if all those characteristics were not enough, P. muticum possesses a spectacular spearmint-link aroma–a pleasant surprise in the winter garden! 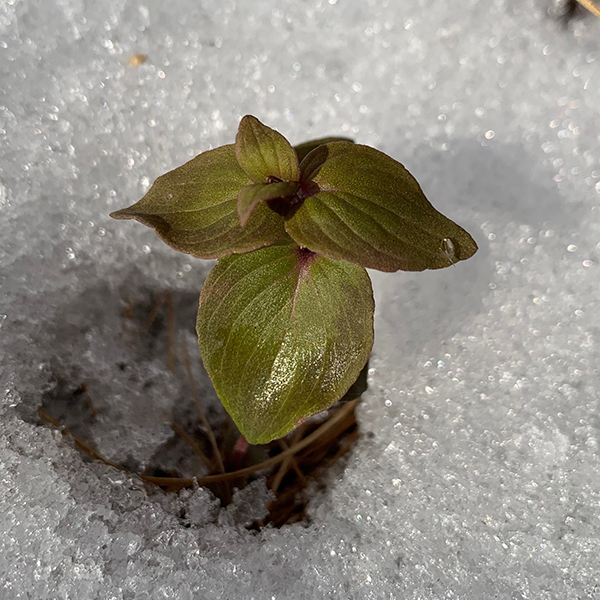